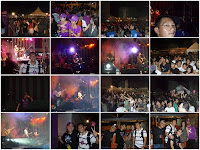 This is rock concert event on rooftop of BB Plaza. It's been a long time since my last rock concert... errr I can't think when was the last one, hmmm... probably i never been to one before :P

In average the crowd were in their early 20's and some of them were half of my age. Yeah, i feel a bit out place :P But thanks to a friend who gave me an advice how to wear in such event. As a result.... no one call me uncle...hehehe

The concert were awesome. I feel so good looking people performing on stage. Well, next in my wish list, I'm going to learn play drums after my Ironman. No more procrastination. You gotta do it man!!!!

dochisyam said…
Yes brader Kam, we are too old for those things. Having said that I drove all the way down to Singapore to watch a concert.
Whwn I get my digital drum set, you practice at my place
Friday, December 26, 2008 at 12:31:00 AM GMT+8

Lifesaver said…
Hey Kam, don't forget about me, ok? I also need to improve on my photo taking skills.