December 10, 2009
This is my first overseas race. It was one great experience as the organizer was very efficient. I have nothing to complain except, too many people took part in the race. The journey started on Saturday morning. Three of us, from KL drove to Singapore entering from Tuas CIQ. We headed straight to Singapore Expo to pick up the race kit. It took me only 5 minutes to settle everything. Super quick! Then we went drooling over sports stuff at the expo. I bought a pair of NB running shoes. It was very cheap only $70. All shoes on sales, I almost buy another pair but told myself... don't!
After that we went to Zam Zam Restaurant for Brayani. Joining us for carbo-loading lunch were Kay, Yusran and his 3 other friends living in Singapore. Thanks to his friend for "belanja" us. After lunch we checked-in into our hostel. Then we went to Mustafa before going to Novena. We did shopping... windows shopping! :P Then we went to Geylang Serai for dinner. After dinner we though of going to see Christmas light at Orchard Road was hampered because Kamarul's car overheated and we stuck at Ion Orchard, a new high-end luxury shopping mall. Half of the cars I saw in the parking were luxury cars with single digit including Malaysian cars. About an hour later, we slowly drove the car out of parking bay heading back to hostel. Lucky us, it was smooth journey.
With lack of sleep, we woke up at 3:30am to get ourselves prepare for the race. We gathered with several other runners staying at our hostel and walked to the starting line about 2km away from the hostel. Enough warm-up before the race. Met up with Haza and several other friends.
There were so many people around at Esplanade Drive. Estimated around 14,000 over marathon runners gathered to torture themselves. Yeah, we are crazy people!!! Singapore managed to make it a one big festival compare to KL marathon around with only 2000 runners for marathon distance. The race started at 5:30am and it was live telecast over Star Sport Channel. I met AJ, Arif & Senn near the start line. The gun went-off AJ & Arif left me and Senn behind. It took me nearly 6 minutes to cross the starting line. Less than 2 km into the run, I pee behind a bus stop opposite Rabobank at Robinson Road. C'mon, this is Singapore! I could be thrown into a jail if I pee in public on other days. That how strict is this country.
The first 10km was nothing, I felt good. I have abundance of power gels to finish today. I already took 2 gels before 10km. When we entered East Coast Park, I had stomach discomfort... oh nooo... gotta find a toilet. But all mobile toilets were full with people queuing to do their business. I had to run until KM 18 before I found a toilet in the park with less people. After settled my big business, I met Steve and Azmar. We ran together for a short while before Azmar & me dropped Steve behind. Steve wasn't feeling well that day. After KM 20, Azmar dropped me because I was bloody slow.
So far the run was ok but slowly I felt the pains at both legs. By the time, I got to KM 25 I walked more than run. Lucky me, I met Kash and we paced each other. We were talking about how difficult and painful is the race. Kash told me, she doesn't want to participate in any marathons in the future. Yeah, I was thinking the same... "this is gonna be my last marathon" like in previous marathon races but wait till I cross the finish line... hehehe.
At KM 35 we saw this sign on the mark "Pain is temporary", well it was unbearable pains. My legs were ok but my ligament that support arch on the sole that hurt. I believe it was because I changed the way I run to midfoot strike. This is the longest ever I ran midfoot strike. No blisters, no knees pain, no cramps but my right sole was very painful.
Once I saw F1 paddock near the Singapore Eye, I started to smile again. Another 2km more to go. I could hear the crowds cheering, the music & announcer. Both side of the was full with people cheering, clapping and giving words of encouragement. I savor the moment when I saw the finish line in distance. Every step was so good. Yesss! I completed my 6th marathon in 5:48. Way off my sub 5 target and not even my PB. But the satisfaction I can't describe, always make me comeback for more races.
Thanks to TSB & Kamarul for your company. And thanks to Yusran for sending me home after a long bus ride back to KL after the race. Hope to race in GE30k in January and Putrajaya Night Marathon in February. Keep on running and stay healthy! 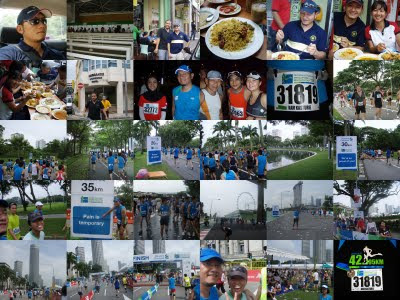 dochisyam said…
Brader Kam,
at our age, just forget about PB and other stuff ok. Just go out and have fun
I'm glad you did