The Knight in Shining Armor 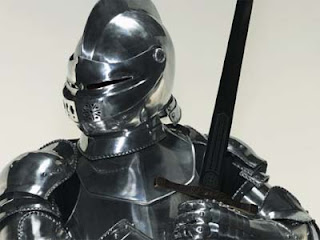 Let me share with you a story which I read from a book. Errr... perhaps there are some truths in it.
There is a knight in shining armor traveling through the countryside. Suddenly, he hears a woman crying out in distress. In instant he comes alive, urging his horse to gallop, he races to her castle, where she is trapped by a dragon. The knight pulls out his sword and slays the dragon. As a result, he is lovingly received by the princess.
As the gate opened he is welcomed and celebrated by the royal family and towns people. He is invited to stay in the town and is acknowledged as a hero. He and the princess fall in love.
A month later the noble knight goes off to another trip. On his way back, he hears his beloved crying out for help. Another dragon has attacked the castle. When the knight arrives he pulls out his sword to slay the dragon.
Before he swings, the princess cries out from the tower, "Don't use your sword, use this noose.
It will work better."
She throws him the noose and motions to him instructions about how to use it. He hesitantly follows her instructions. He wraps it around the dragon's neck and then pulls hard. The dragon dies and everyone rejoices.

At the celebration dinner the knight feels he didn't really do anything. Somehow, because he used her noose and didn't use his sword, he doesn't quite feel worthy of the town's trust and admiration After the event he is slightly depressed and forgets to shine his armor.
A month later he goes on yet another trip. As he leaves with his sword, the princess reminds him to be careful and tells him to take the noose. On his way home, he sees yet another dragon attacking the castle. This time he rushes forward with his sword but hesitates, thinking maybe he should use the noose. In that moment of hesitation, the dragon breathes fire and burns his right arm. In confusion he looks up and sees his princess waving from the castle window.
"Use the poison," she yells. "The noose doesn't work."
She throws him the poison, which he pours into the dragon's mouth, and the dragon dies. Everyone rejoices and celebrates, but the knight feels ashamed.
A month later, he goes on another trip. As he leaves with his sword, the princess reminds him to be careful, and to bring the noose and the poison. He is annoyed by her suggestions but brings them just in case.
This time on his journey he hears another woman in distress. As he rushes to her call, his depression is lifted and he feels confident and alive. But as he draws his sword to slay the dragon, he again hesitates. He wonders, Should I use my sword, the noose, or the poison? What would the princess say?
For a moment he is confused. But then he remembers how he had felt before he knew the princess, back in the days when he only carried a sword. With a burst of renewed confidence he throws off the noose and poison and charges the dragon with his trusted sword. He slays the dragon and the townspeople rejoice.
The knight in shining armor never returned to his princess. He stayed in this new village and lived happily ever after. He eventually married, but only after making sure his new partner knew nothing about nooses and poisons. 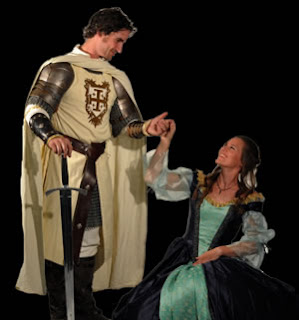 Deep in side every man there is a hero or a knight in shining armor. More than anything, he wants to succeed in serving and protecting the woman he loves. When he feels trusted, he is able to tap into this noble part of himself. He becomes more caring. When he doesn't feel trusted he loses some of his aliveness and energy, and after a while he can stop caring.
Remembering that within every man is a knight in shining armor is a powerful metaphor to help you remember a man's primary needs. Although a man may appreciate caring and assistance sometimes, too much of it will lessen his confidence or turn him off. 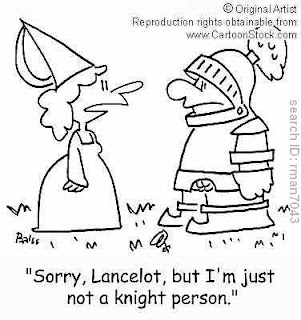