April 20, 2011
I remember about a year ago I took part in the first ENR and I was pacing Diana to complete her first ever marathon in exactly 6 hours. We had so much fun and I expected a better race this year especially when they have it at Sepang International Circuit.
Although SIC was built more than 10 years ago, this is my first visit to that place. What make it more interesting, I had the opportunity to run on the track and get a close look of being an F1 driver burning rubber on the track. In this case burning my shoes... hehehe
The race started at 7:45pm in front of paddock area. For 42km category, the first 5 loops we ran outside the circuit. I think it was quite well organized on the outer loop. We had enough water stations with plenty of water & Gatorade and a number of volunteers and medics. The feelings of running in a loop, brought back my memory of running legs in Ironman Langkawi. Mentally and physically, I was strong. I have no problem finishing a marathon. After all, this is my 10th marathon excluding 2 Ironman.
The last loop about 5.5km, we had to run inside the track. It was great experience running on the track. Unfortunately, there was no water station around the track except for last 1km. About 200m to the finish line, I saw the digital clock at the finish line showing 4:59:xx. I don't believe it! I would be able to clock sub 5 for the first time! I was sprinting like Usain Bolt to cross the finish line before 5. I made it in time just one second before 5 hour. 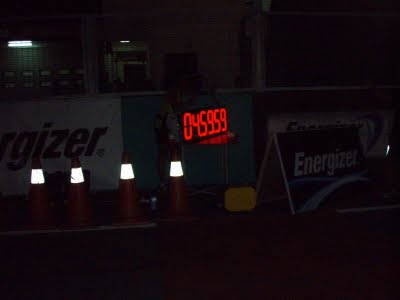 Yeay... I felt like on the cloud 9. Finally, I did sub 5!!!
Only then I realized all the official had gone back leaving the marathon runners and a few volunteer at the site. I didn't know where to get my medal & finisher t-shirt. There was no goody bag too as promised by the organizer. Before we went home, we stopped for late supper at mamak.
Only after I got home and checked my FB, I realized what was happening during the 5.5km, 11km & 21km, all the commotion and dissatisfaction of the participant & supporters. It wasn't a pleasant experience for most runners. It became a talk among the running community and it was published in the local newspapers. The news travel all over the world all the way to the Energizer HQ in the US. I do not want to elaborate here but you can Google about it in the Internet & Facebook. And thanks to the organizer for shattering my dream because I've been told by other runners the actual distance was 40km only and it wasn't sanctioned by the MAAU & FTAAA. Therefore, my record is invalid... Dayem! :P
Well, my quest for sub 5 shall continue in Sundown Marathon next month. Gambarimashou! 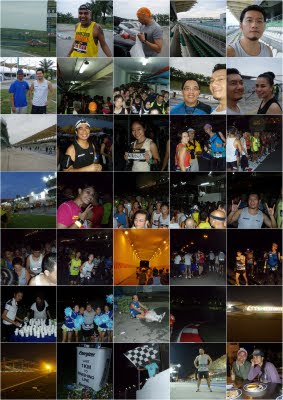 You will know they just ran a marathon the day before, if they walked like this.... hahaha. Have a good laugh.
marathon race

Kam Kasturie said…
close la but not that close to my real 42km target... hahaha