November 20, 2013
Initially, I signed up this race with an intention to run on the new bridge but the organizer changed back to old bridge after the incident early this year when part of the new bridge crumbled down and people get killed in a car that went through underneath the bridge was crushed like a pancake. Anyway, I went to Penang with my nephew. He was doing his 2nd marathon and I... errrrr I don't remember how many marathons have I done. Probably, my 25th or 26th marathon??
Anyway, I met up with Karen, Izwan, Burn, Fayzrul and Shahril during race kit pick up. Later OP Iran came with his car to fetch us at Queensbay Mall. Our first round carbo-loading with Nasi Kandar at the original Kayu Nasi Kandar, then went to the hotel for resting. Later around 8pm, we went to the same restaurant for second round carbo-loading, this time I ate Roti Naan & Ayam Tandoori. I was sure it was more than enough to fuel me up for 42km journey on foot.
Earlier that day OP Ala gave me OP Saiful Azlan's contact who will be running full marathon. I made a contact with him and he came to fetch us at the hotel around 10pm and we were heading straight to the race venue at Queensbay Mall. OP Iran ran half marathon went slightly later with a shuttle bus from the hotel. It was raining pretty heavy around 12am until near start time at 2am. OP Saiful was my senior in RMC. He claimed he never took part in any races and he never training for the marathon, not even 1km. Yeah, x-RMC are bunch of crazy people. The way he dressed with a complete high-end running gears, I doubt his claims until he was slowly left behind after the race start and I didn't see him at all after that.

I met another friend Azwat at start line and he told me he has signed up for Ironman Langkawi next year and ask me if I sign up too. Sorry mate, I don't feel like doing another Ironman in Langkawi. I don't have enough budget and I don't think I can commit to the training program. By the way, good luck to you and happy training!
To feel the sense of achievement when you run a marathon, you must clocking your personal best. But I also feel great satisfaction if I able to pace someone to finish his/her first marathon or help them to clock their PB. In fact, Helmi was asking me to pace him in his first marathon during SCKLM last September. Unfortunately I was in Germany to run Berlin Marathon. Therefore, I decided to let go my quest for better timing in this race and help pacing my nephew.
He was doing very well and managed to follow my pace throughout the first half until we get to the other side of the bridge. On the way back to the island he had cramped up, and I had to slow down the pace just to ensure he can continue to finish the race.
Looking at his face I know he was suffering big time and I may have pushed him a little bit harder than I should, I didn't see him smiling at all after 33km U-turn. I never told him running a marathon is easy, so he should have foreseen the agonizing and excruciating experience he will be going through. Unfortunately for him, I'm very good at torturing people after honing my skills at it in RMC...hehehe

Finally, we crossed the finish in 5:33 and right after that I could see him smiling again. This time with a bigger smile because he achieved his PB. Well done Helmi! Hope one day you will be a stronger runner than me to break my record but I'm not going to let it happen easily. So, it's gonna be a big challenge for you. By the way, OP Saiful was DNF but not until he hit 20km mark. Considering for a person who didn't train at all, I think he performed a great feat! At least he knows what he capable of and imagine if he trains properly.
After the race I met Fazli, Siawhua, Karim, Rashid, Aizat, Faris, and Ian. I gave a challenge to Izwan for him to run his first full marathon next year on the new bridge. Maybe I will pace him in that race. And yes, I do enjoy torturing my friends in a race....huahahaha (with evil laugh). 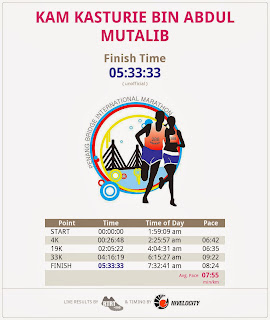