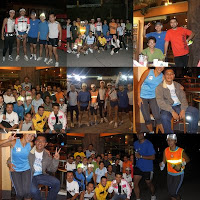 Our annual ritual during Ramadan is to run/cycle up to Genting Highland. Normally, we did twice every weekend but this year we started at 2nd week of puasa and only once a week. That nite, there were almost 40 of us together with the love ones as support driver took part in this run. The most interesting part was my batchmate in RMC Ala, Bandit, Boot, Budin, Upiq, Zamri, Bean were there too. It was like a reunion.

It was tough for me coz i haven’t run since 1st day puasa. We started from Genting Sempah in front of McD. First stage towards Gohtong Jaya I ran together with sweet Kar Yan. Not only she got the look but she's full of the stamina too. My heart rate was 103% trying to catch up with her…. Or maybe because of other thing, only 2 of us in the dark, dirty, sweating, huffing & puffing slowly reaching the peak…sound steamy huh?:P Near Gohtong Jaya she left me behind because I stopped to fill my bottle...... errr actually because i was too slow for her level.

From Gohtong Jaya I was alone. I couldn’t run right after the police 2nd checkpoint coz cramped up both legs. I resorted to walk from there on. About 3km from the summit I rested a few minutes with Bandit & Zamri stopped by the roadside in Ala's pick up while waiting for others. I was joined by Shazly and we walked up all the way to First World Hotel in very cool midnight breeze and join other mutants (those who reached there earlier than us) at Starbuck.

After photo session and a few cups of warm coffee, we went back down in support cars. Ala went down on his bike but Yip ran all the way down to Genting Sempah. He is truly amazing. It was great fun & next week another session with Steve.

Anonymous said…
well done. The main thing is the participation not being there first or fast. Im also happy that your getting on with your life!Keep it up