February 19, 2014
Continue from previous post "Trip to Krakow". OK, this is the last part of the write-up about my trip to Germany & Poland


It was a bit sad to leave Warsaw and Agata. After a week together we were thinking alike. Even on the final night we went to bed in the same color of pajamas. That morning before leaving Warsaw I went to buy candies & chocolates at Carrefour in Zlote Tarasy to bring back to Malaysia. Then we're rushing to the platform and found the train has arrived. It is time to say goodbye, after giving her last hug, I boarded the train. The train slowly chugging away leaving the station and I keep on waving my hand at Agata until she gone from my sight.

In the train to Berlin, I was sitting in a cabin coach shared with five other people. Three Polish guys and a Ukraine couple, no hot Polish chicks :P There was an incident in the train after half an hour ride when a Chinese lady with 2 small daughters came to our cabin and showed her tickets that my sit and another guy belong to her. She doesn't speak English nor Polish, so it was communication breakdown. One of the guys went to get train conductor while I stood up to give my sit to her small kids and moved to the next cabin with a beautiful girl in there. When I about to strike a conversation with her the conductor came to resolve the problem with the Chinese lady. Later we found out the Chinese lady booked the ticket on the wrong date. Unfortunately, I have to move back to my own sit :(

Traveling from Warsaw to Hamburg took one whole day with transit in Berlin Haupbahnhof. I arrived in Hamburg Haupbahnhof around 8pm but my host was nowhere to be seen because he was also on the way back to Hamburg from Sweden after visiting his girlfriend. I had to wait for more than half an hour before he showed up later. 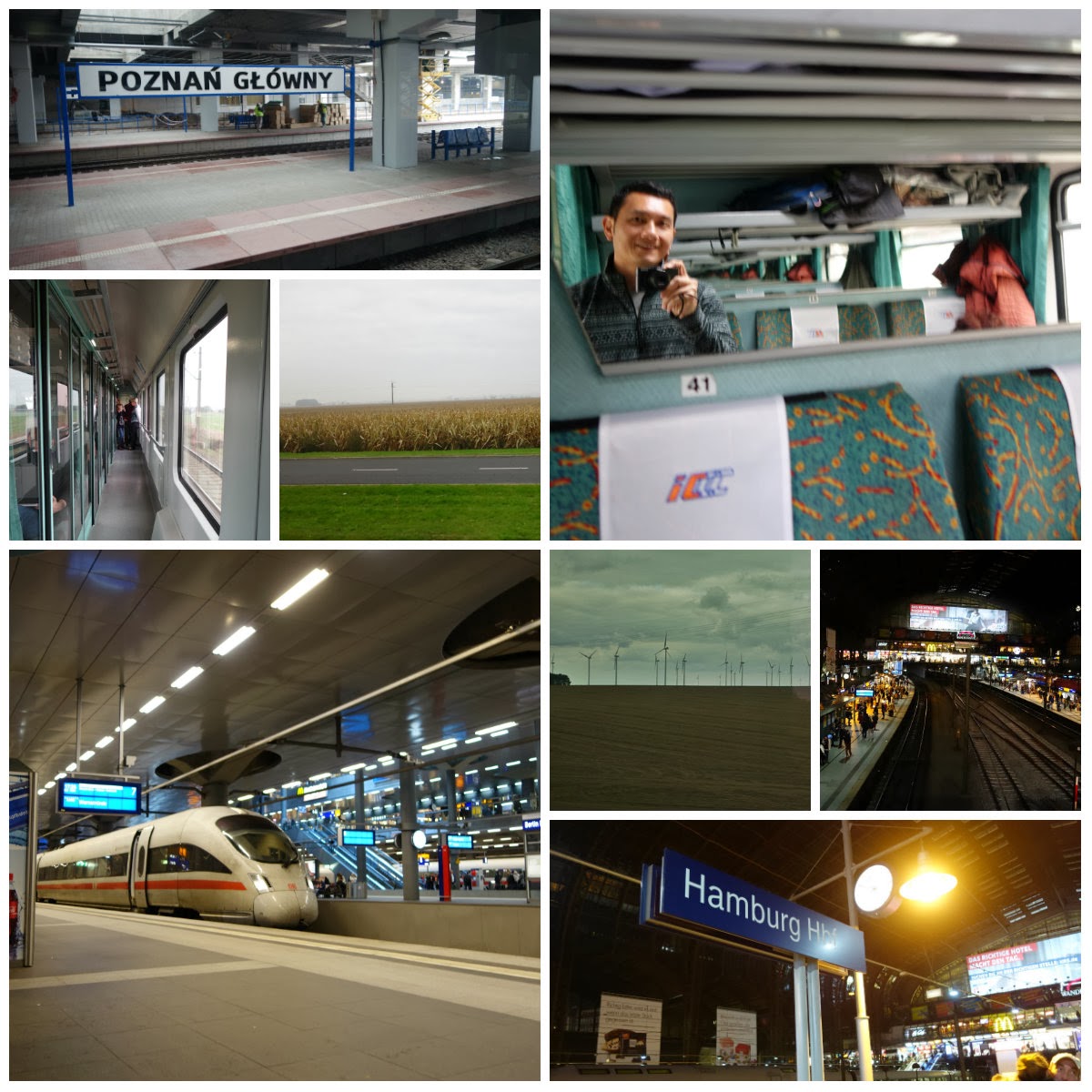 How did I get to know Amriz my host in Hamburg?? Actually, we never know each other back in Malaysia. I met him in Tokyo in 2012 when I was there for Tokyo Marathon. This time around I met him again because I ran another marathon. Actually, he made me run Berlin Marathon because he keeps on insisting me to come to Hamburg but I told him, I don't want to go there just for a sight seeing, I want to run a race at least marathon distance before the sight seeing. What better race other than the world major Berlin Marathon which become every marathoner's dream, right? ;)


From the station we walked to his apartment about 2 kilometers away. The first time I saw his place, it was like a building in ghetto area. The walls full with graffiti but somehow it was clean and the place located right in the middle of Hamburg Business Center. The opposite building was Olympus main HQ for Europe. It was quite cozy inside his apartment but being a place for bachelor, it was a tad messy just like my place but can't compare to Agata's in Warsaw. Agata's apartment was so clean and shiny, and smell nice too ;)
On the first day he took me out for shopping at a bundle shop and TK Maxx (similar to factory outlet here) because his passion in fashion. He is a fashionista and a bit eccentric, he knows how to mix & match; he will comment on how I should dress and guide me the do's and don'ts when dressing. I wonder why I didn't take photos while shopping... haha. But I tell you, it was a fun activity! I went through the bundle of branded shirts, jackets, pants, sweaters, accessories and when you discovered something that you like and fit your size, it was like found a treasure.

Amriz told me he tendered his resignation at AON recently and pursuing his passion to open a vintage clothing shop. At that moment he was in proposal stage to the German Entrepreneur Agency to seek for some start up fund. I'm so proud of him, being a Malay in German trying to set up a business. Another thing, German's government did not restrict the monetary assistance to their own people only but they extend it to their PR as well. Living in German and married one, guarantee you a brighter future. Lucky him!
The following day we went out to discover Hamburg the second biggest city in Germany after Berlin. First place he took me to is Alster Lake. We cycled at small section of the lake. He promised to take me run around the lake about 6 km loop. I said to myself, wow... he's going to run 6 km with me?! I thought he must have been taken up running for the past one year after we met up in Tokyo. But how wrong I was..... I tell you about it later.
Then we cycled to Town Hall (Rathaus) area. There was a 100 years old building and it was so majestic. You can enter the building but it cost EUR4 per entry. The area full with people especially tourist. You can find a shopping area near by as well.


Not far from the Town Hall I saw many Polizei at one stretch of the street. We were wondering what's happening there. Later, we saw a big group of protesters carrying banners and placards in a street demonstration. Most of them don't look like local people. I didn't understand the words on the banner but according to Amriz, these people are fighting for the rights to get better treatment in German as immigrant workers. According to Amriz, actually the government back up by European Union have done so much to help these people. Unlike in Malaysia or Singapore, if Indonesians or Bangladeshis do the same, I'm sure the police and immigration will bundle them on the trucks and deport them back to their own countries. I'm actually quite surprise by the good treatment European Union given to the immigrants. In one way I think we should acknowledge the contributions given by these foreign workers to the development of our country.
Other famous landmark was Church of St. Michael. Amriz did explain to me about some of these places but I don't remember most of them. 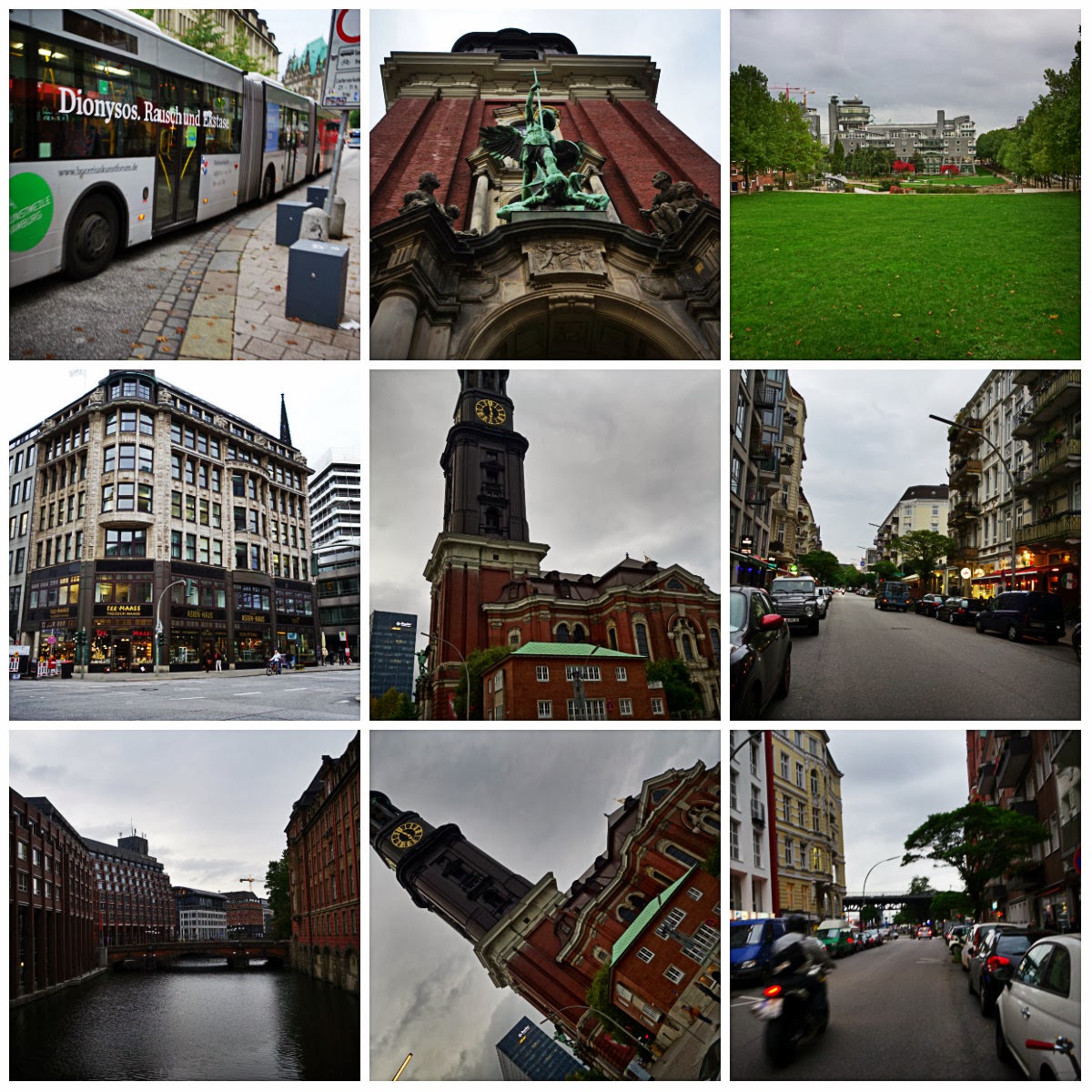 Amriz took me to this place near the port. I saw a red/green three masted sailing ship called Rickmer Rickmers. It's a floating museum ship. There is an interesting history about this ship. It was built in 1896 in German and used to carry rice and bamboo on Hong Kong route. Then it was captured by Portugal during WW1 and then loaned to the UK government. Later it was used as navy training ship by the Portuguese.

Then Amriz called me out while I was busy taking photo, "Kam, I want to show something you won't see in other places before". Wow, this must be something very interesting not to be missed. He led me to a small building at the end of Hard Rock Cafe Hamburg. I saw an entrance with elevator door inside. What is this place? On the wall there is signage "Elb Tunnel". Tunnel?? To where?

Elb Tunnel actually is a pedestrian and vehicle tunnel built in 1911 which connecting central Hamburg with the docks and shipyards on the south side of the river Elbe. We slowly pushed our bicycle into one of four huge elevators before it went down 24 meter beneath the surface. It was amazing, I can't believe it was built more than 100 years ago. Then we cycled through 426 meter tunnel below the riverbed.

And the view of Hamburg from the other side of riverbank was stunning!! Amriz said, ships as huge as Queen Mary 2 will sail through this river twice a year. Once he saw the ocean liner passing through and it covered the whole view of Hamburg city from this side.
We sat down here for awhile talking about our lives back in boarding school days (he was from STAR Ipoh) and our future planning while enjoying the nightfall view of Hamburg. I'm glad I get to know Amriz. He's the one who inspired me to go to German. Without his invitation to Hamburg, I may not be running Berlin Marathon or going to Poland. Ohh well.... I went to Poland because of Agata ;)

Before we heading home for dinner, we passed through a place call Hafen City. I love the night view here with all the spotlights, it was so beautiful. It's a new area with quiet neighbourhood and many modern condominiums and office buildings. My kind of place, I would love to live here.
After dinner we had some rest before going out again to check out a place called Reeperbahn. Reeperbahn is a street in red light district. The street is lined of restaurants, pubs, bar, discotheque and clubs. There are also strips club, sex shops, brothels and similar business around here. In the early 60's before Beatles becomes popular, they played in several clubs around here.
I also went to checkout "Herbertstrasse" a street blocking by a gate with signage prohibit juvenile below 18 and women from entering the area. Hmmmm.... interesting place for men. After looking around for few minutes, we went to a regular club to meet up with Amriz friends.
The next morning on my last day in Hamburg, I went to run around Alster Lake. Amriz was on the saddle showing me the way. One loop about 6 km. Great view, nice weather, beautiful morning and it was a good run. I love it!!

That's all folks write-up on my trip to Germany & Poland. I spent less than RM5k for the 3 weeks trip including flight tickets (excluding shopping at Tk Maxx). You don't have to spend so much money to travel to Europe. I think I enjoying the trip more as a budget traveller. Still thinking where to go next year in 2015. Chicago??
travel travelling Vacation
Location: Hamburg, Germany