Trekking to Annapurna Base Camp, Nepal

I decided to go trekking in Nepal after meeting up with Yong & Saligram at World Mountain Treks booth in MATTA Fair this year. Yong showed me photos from his trip during the devastated earthquake in April and Saligram ensured everything's okay now and Nepal needs more tourists to come so that Nepal can rebuild her economy from tourism.

I took AAX direct flight to Kathmandu. On approaching KTM I saw Himalayan Range from the window. It was an amazing view! The temperature was cold for me who came from tropical climate.

The next day we took bus ride to Pokhara. Pokhara located about 205 km to the west of Kathmandu. The journey took about 7 hours because of the narrow road. The good thing about these buses, they equipped with free Wi-Fi. 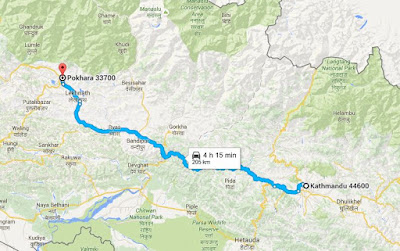 The journey started from the hotel in Pokhara, drive to Nayapul took about 40 minutes via highway (tarred road). Nayapul (1033m) is a small village located near the highway. First day is the easiest day. We walked about 9.2km with the first half way on gravel and the rest on trek. Total elevation gain about 592m to reach Tikhedhunga (1516m).

Today we walked slightly longer about 10.8km. From Tikhedhunga (1515m) to Ghorepani (2874m). The first 3km was the killer, very steep climb. We gotta see the peak of the mountain on the trek and the best view of mountains when we reach Ghorepani. There were mossy forest along the trek. Total elevation gain about 1432m. 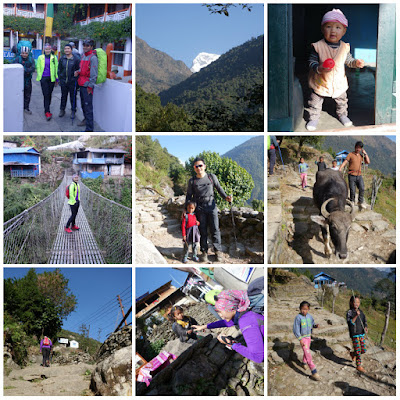 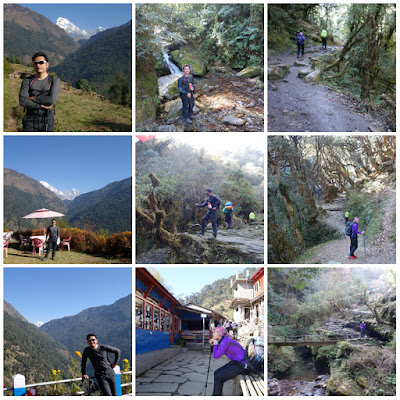 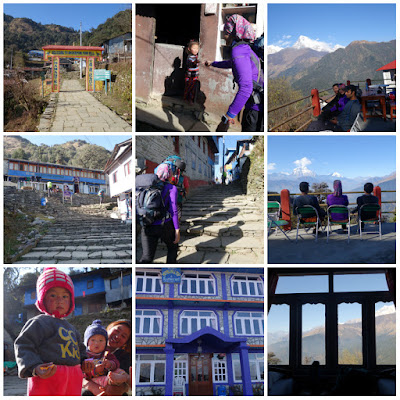 Since we trekked very fast to Ghorepani on second day, we decided to climb up Poon Hill for sunset instead of going there for sunrise the next day. Poon Hill (3210m) only 1.5km from Ghorepani (2890m) with elevation 320m climb and it took us around 45 minutes. I think this is the best view of all places we went to in this trip. It would be shame if you go to ABC but don't go to Poon Hill.

The first 3km we climbed Gurung Hill (3200m) almost as high as Poon Hill. We could see Poon Hill on the other side. View from Gurung Hill was awesome! We could see Mt. Annapurna South & Mt. Fishtail clearly from up here. After Gurung Hill we going down and down and down for 6km to below 2500m. That was about 700m descent. Then the last 1km we climbed up to reach Tadapani (2680m). Total distance was 10km with 834m total descent... sakit lutut wooo!!!
2494m 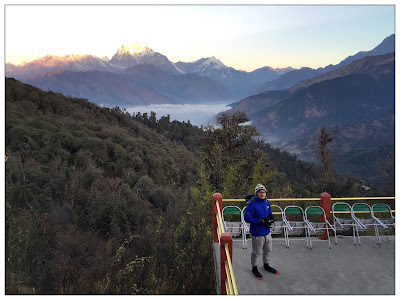 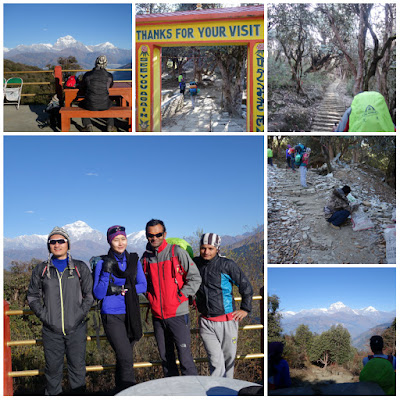 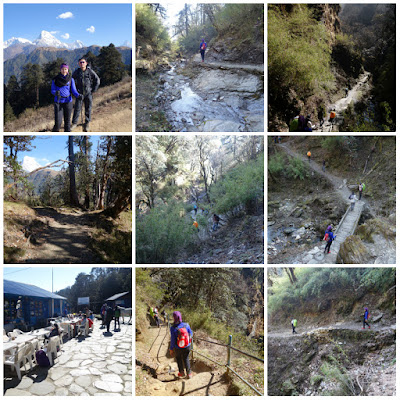 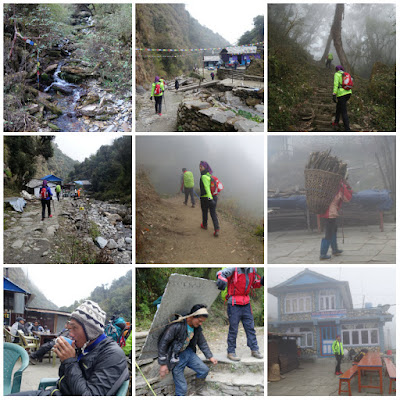 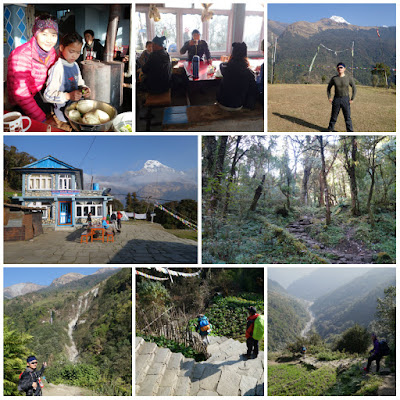 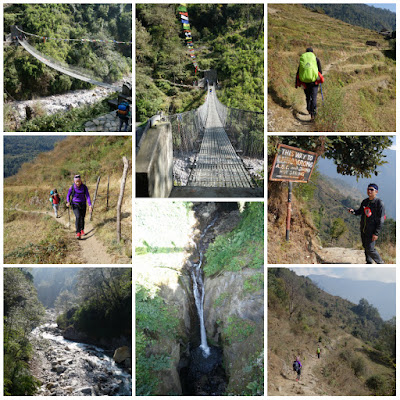 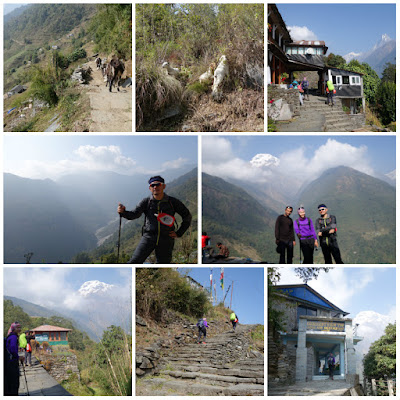 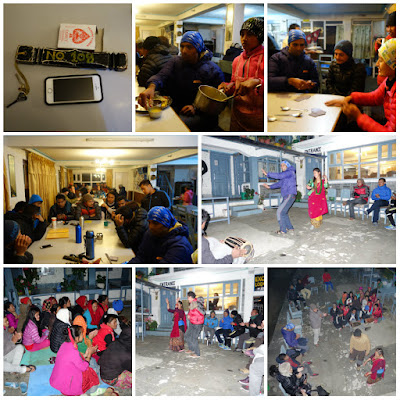 From Chomrong, we trekked down to 1881 meters elevation to cross the suspension bridge before climbing up and up to reach Sinuwa. From Sinuwa we actually could see Chomrong and on the other side we could see Dovan our tea house for the night. 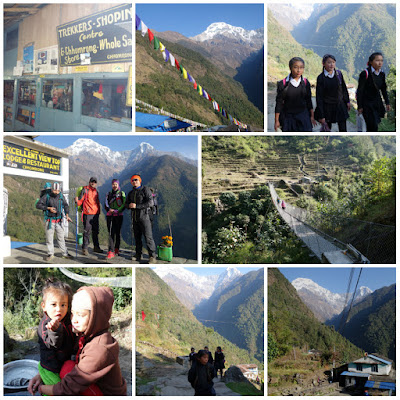 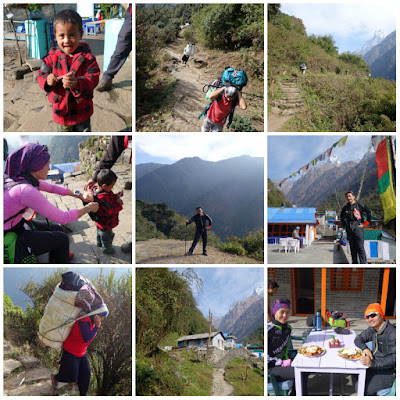 The next day in Dovan, I didn't feel good. My body temperature increased like I'm having a fever. And my head was spinning. I think I had light AMS. My body unable to acclimatize at this altitude. But I still continue trek as planned.

I guess overnight stay in MBC was the worst experience throughout the trip. It was very cold and all my fingers both hands and feet were very painful. Only after I slipped into sleeping bag, I feel better and can sleep well.  It was so cold until the tap water got frozen.

We woke up very early in the morning around 4am and get ready to hike up to ABC for the sunrise. It was an easy trekking 3km and mild elevation. We reached ABC in about one hour plus and had our breakfast at the guest house before photo session. 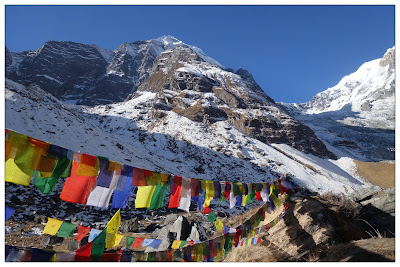 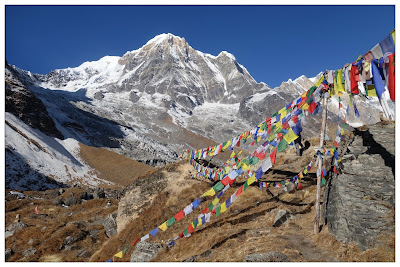 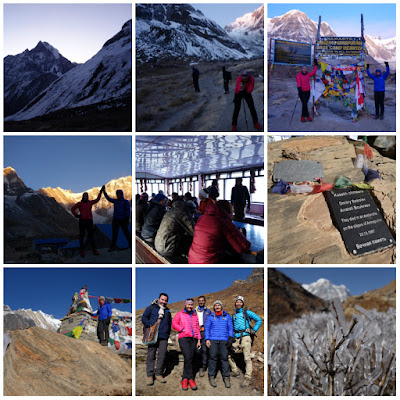 After getting some rest at MBC, we packed our bags and went down to Dovan in no time.

Trekking down to Jhinu we have to go through Chomrong. Climbing up Chomrong was tough. From Chomrong the track was very steep to Jhinu. 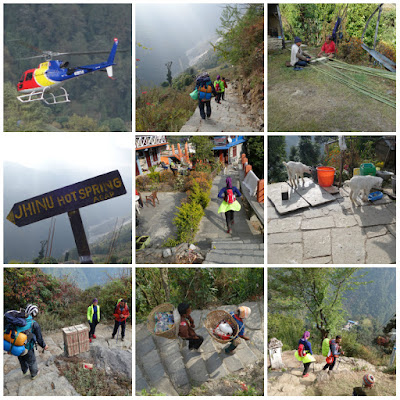 After check-in at guesthouse in Jhinu, we trekked down for about 1km to Hot Spring near the big river for nice dip in hot water. Felt like going to onsen in Japan during winter. 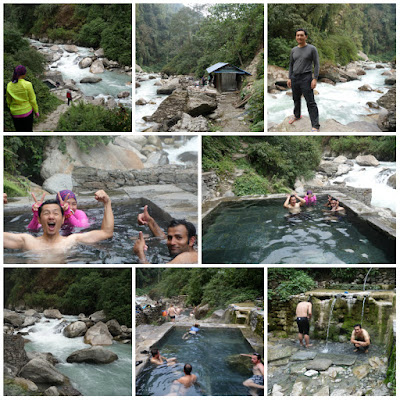 Long walk but mostly flat. When I said flat, it's mountain flat. Total distance was 18.6km with nearly 981m descend and 272m ascend. Yes, some up and down the terrain. 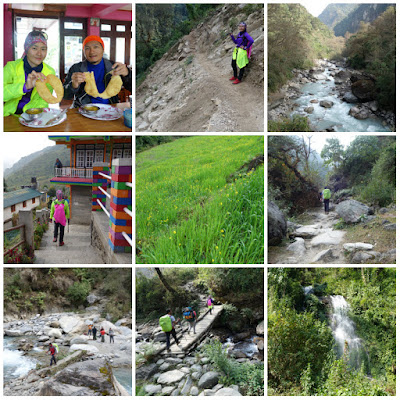 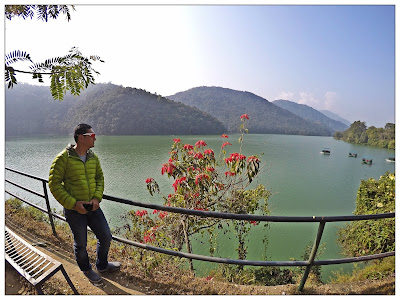 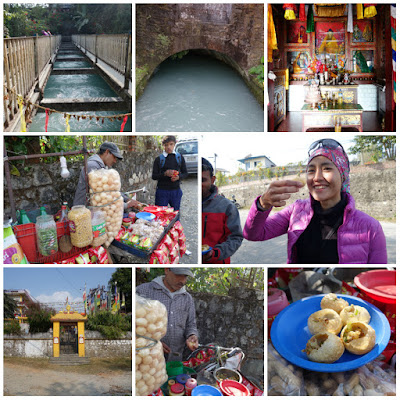 Back to Kathmandu and flew back home

Last minute shopping before going back to KL. Thanks to Saligram for a wonderful experience in Nepal. We will definitely come back for EBC soon. 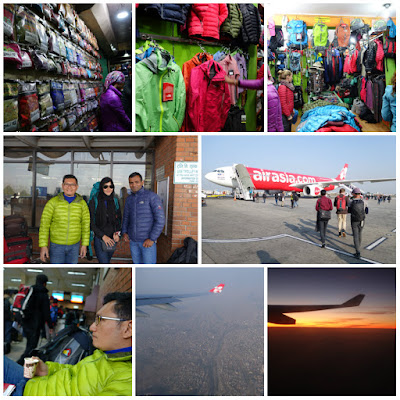