October 11, 2012
The trip was planned about a year ago during our trip to Taman Negara. Initially, there were about 30 of us wanted to join the trip, but "all-boy trip to Thailand" doesn't sound right to our wives. Most were denied their right to travel to Krabi and leave passes have been revoked. Eventually, only 9 of us OP Bandit, OP Ala, OP Jubes, OP Bean, OP Mandela, OP Mahin, OP Abenyu, OP Kebu & me lucky enough to be on the trip.
From the airport we took a van straight to Ao Nang where the resort located. We were staying at Vipa Resort, a hut style resort with individual single rooms and chalet with rooms. Actually the resort nowhere near the beach but the place has nice view with 300 meter limestone cliff in the background. The owner of the resort Mr. Yat is a good friend to Mahin. Mahin has visited Krabi almost every year and sometimes he stayed for months to enjoy rock climbing and other activities.

After checked-in we went straight to the beach town. Ao Nang is a central point of the coastal province of Krabi, just like Patong but much smaller in size. It was drizzling at that time, we had early dinner and after dinner we strolled along the row of shops looking for souvenirs and to get some good massage.
The day still gloomy on second day. We took a boat ride to National Park Ko Hong Island. It was one of the islands badly hit by the tsunami in 2004. There were several tourists perished during the catastrophe. Government has erected a tsunami warning tower near the beach with plenty of sign-age to show the direction to higher ground.

On the island, we kayaked around it about 5 km before having lunch. After that, we went to another island (I don't remember what island it was) and we snorkelled near the beach.
Boys always be boys. Not enough playing water in the sea, we played in the pool. Bandit, Ala & me showing off our jumping skill into the pool pretending to be Pandelela Rinong. Bandit scored perfect 10 points with his "jambu" style.
After the BBQ dinner, Mahin borrowed a pick-up truck Mitsubishi Triton from Mr. Yat and we heading to Krabi Town. We were lucky because "pasar malam" (night market) was happening that night. We tried all kind of food available there.

On third day we decided to go to Railay Beach. Railay Beach cannot be accessed by road due to the high limestone cliffs cutting off mainland access, so we took a boat ride from Ao Nang beach. The area popular with its beautiful beaches and quite relaxing atmosphere. It is also popular destination for rock climbers from all over the world with many limestone cliffs route to climb. The four main areas of Railay consist of Pranang, West Railay, East Railay and Tonsai. We didn't go to Tonsai. Joining us were Agata & Lisa.


Mahin guided us to discover a hidden Lagoon between East Railay & West Railay. To get to the lagoon we had to do jungle tracking (more climbing actually) going up muddy trails through a hill and then went down into the lagoon. To most of us in our middle age and lower fitness level, it was very challenging expedition. It took us 3 hours to get in and out of the place.


After that we went to check out the beautiful panoramic West Railay Beach. There were people climbing the cliff near the beach but we went swimming instead. After watching the sunset, we went back to Ao Nang.

Ohh.. I found a very interesting shrine in the cave near the end of West Railay beach. There were hundreds of colourful penis-like carvings in all sorts of shapes, sizes and hues. It is believed among the villagers that the spirit of Phranang (Princess Goddess) resides in this cave. Fishermen would pledge Phranang for good catch before going out to the sea. When their wishes fulfilled, an offering would be at the shrine with common gifts like flower or incense sticks but usually the goddess will be offered with very special gifts... "the penis".
Every night without miss, we hanged out at Boogie Bar for drinks and chilled out after hard day outing during the day. Live band playing retro and reggae songs at the bar until late night. There were many other bars around this side of Ao Nang. Since there was no mamak stalls for teh tarik, we hanged out at bar for cocktail tarik but no alcoholic drinks for me please. At the other end of Ao Nang about 500 meter from Boogie Bar there were clubs with techno music. You can find strippers doing pole dancing here. How did I know?? Errrr.... my friend told me!


People are being drawn to Krabi in search of the idyllic beach which Phuket and Koh Samui offered decades ago but in danger of losing it when it gets bigger and heavily commercialized. Krabi is in smaller scale compare to Phuket in term of entertainment and facilities. Good place to chill out, more family friendly and perfect place for those seek for adventures. 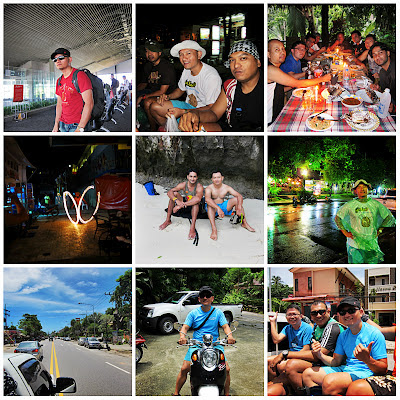 Our next trip in 2013 would be Kota Kinabalu.
RMC travelling Vacation
Location: Krabi, Thailand

Anonymous said…
nice place but i still prefer my sabah..hehehe.. ;)

Sbipk said…
Woww!!! nice trip. If you can’t decide for your next trip…Phuket is the best choice for you!!
I love here Surin Beach Hotels This hotel is very nice clean and the people are friendly. VERY nice hotel with helpful staff.
And I really love white sand, crystal clear waters at Surin Beach too.
Thank again.
Friday, October 26, 2012 at 3:28:00 PM GMT+8